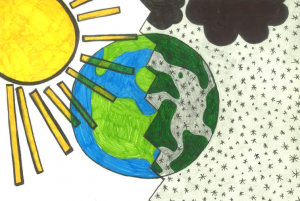 According to the Yale Program on Climate Change Communication, 70% of Americans think that global warming is happening. Most people base their opinion on the fact that, according to the Intergovernmental Panel on Climate Change, global temperatures have risen on average 1.5° Fahrenheit since 1880. Additionally, global carbon dioxide levels have drastically increased since the 1900s, around the same time that temperatures started rising, causing many people to believe that the two are correlated.

The rise in global temperatures is shown in different ways. The rate at which the arctic ice caps are melting is quickly increasing, raising sea levels. Furthermore, rising carbon dioxide levels and global temperature are causing heat waves and droughts to become more frequent and more intense.

Nevertheless, the debate over the very existence of climate change, especially caused by humans, is alive and well. Some argue that the rise in global temperatures in the 1900s does not stray from the pattern of natural temperature fluctuation from the previous 3,000 years. Additionally, some studies have found that a rise in carbon dioxide levels does not necessarily cause global warming. A study conducted by the Proceedings of the National Academy of Sciences, for example, found that during a strong glaciation period around 550 million years ago, global carbon dioxide levels were five times greater than they were in 2010.

With Earth Day, which fell on April 22, in such close proximity, it’s important to think about the planet’s health so we can preserve it for future generations.