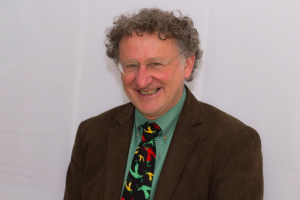 “My whole life has been unconventional,” social studies teacher Shmuel Afek said. After living in New York City for two years, in 2006 Shmuel interviewed and was ultimately employed at Heschel. “Fun fact: I’d never taught social studies before,” he added.

Shmuel’s journey to Heschel began in London, where he was born and raised. In 1968, when he was in high school, his family took a month-long vacation to Israel, and the following year, he made aliyah. Because of the rigor of his school in England and the relative lack thereof in his Israel school, “I didn’t have to do a lot of studying and could spent a lot of time acculturating into Israeli culture,” he said.

After high school, Shmuel was drafted into a Nachal Unit of the IDF, where he helped to establish and settle new settlements that were operated by the army in preparation for their being transferred to civilian control. As part of his service in Nachal, he spent some time in various combat units.

In the spirit of Nachal, following his army service, Shmuel settled on kibbutz Rosh Tzurim in the Gush Etzion bloc. There, he held various jobs, working as a welder, director of cultural activities, and overseer of the communal dining room, at different times. Eventually, to fulfill the kibbutz’s need for a Judaic studies teacher, Shmuel studied and was ordained at Yeshivat HaKibbutz HaDati. Shmuel then taught and advised a class of approximately twenty students on the kibbutz.

“For almost twenty years the kibbutz was fun, but then it wasn’t,” and as such, after metaphorically “graduating” from the kibbutz, Shmuel decided to move to Jerusalem with his family. Shmuel continued teaching Judaic studies classes in the Israeli public high school system.

“When we moved to Jerusalem, I realized I need a degree,” Shmuel said, laughing. He began studying history, a subject that had long interested him, in an “open university,” which allowed him to take classes and exams remotely. He taught during the day and studied at night, all the while raising a family.

Upon completing his BA, when faced with the difficult choice of earning a master’s in education or Tanakh, Shmuel turned to a mentor of his, who advised him to “choose the subject where you think you can contribute the most.” He settled on education.

After ten years in Jerusalem, Shmuel was offered a position as head of the Judaic Studies department at a pluralistic Jewish school in Ohio. Over the next five years, Shmuel and his family lived in Chicago, Phoenix, and New York, depending on where he taught.

Even during his time as a Judaic Studies teacher, Shmuel had been thinking about social studies and the “correct” way to teach it – most notably, the way to incorporate Jewish and general histories, as is taught in the current Heschel curriculum. In fact, Shmuel’s arrival at Heschel was, in some sense, facilitated by Lisa Cohen, whom he met at a conference about teaching social studies in this way. After he applied for a job in the Limudei Quodesh Department, he reached out to Lisa, who invited him to teach in the Social Studies department. “I said ‘I’d love to, but you’ve seen my résumé, and I don’t have any background in teaching history,'” and [former high school head] Ahuva said, ‘I know, we trust you,’” Shmuel recalled of his original hiring. “It wasn’t easy, but I got a lot of help.”

“I have to remember all the time that teaching isn’t about the teacher and their opinions, but about facilitating learning,” Shmuel continued. “It’s never about me.” To this end, Shmuel has been careful to make very few political statements to his students, instead hoping to expose them to varying perspectives and to think in different ways. Shmuel has tried to remain apolitical, and described a “yes!” moment of his career of walking into a room of two students arguing over his political opinions.

Over the course of his ten years in the Social Studies Department, Shmuel has played an integral role in reshaping the curriculum to its current form, and he has broadened the department’s course offerings.

Two years ago, Shmuel began offering an honors seminar on race for sophomores. “As a white person, I was pretty oblivious to the racial tension and discrimination that exist in this country, and like many other white people, I became aware of it when suddenly figures like Trayvon Martin and Michael Brown were going viral,” prompting him to organize a curriculum exposing students to new ideas and challenging their assumptions about race, something he noted is often uncomfortable. The challenge, he explained, is to push students far enough out of their comfort zones that they are learning, but not so far such that students stop listening.

After his own experiences in modern Poland, Shmuel also began offering a course on the country’s contemporary history. Most recently, after much dialogue with non-Ashkenazi students who wanted to learn about their family heritage, Shmuel offered a senior elective on Mizrahi Jews. Both of these courses will be offered next year.

Shmuel’s experience teaching at Heschel has been overwhelmingly positive. “I can imagine Gan Eden or Olam Haba being like Heschel, just without grading papers,” he said. To Shmuel, what makes the high school so exemplary is his sense that students “understand why they are here,” which he had not experienced in his previous jobs. Moreover, he appreciates the fact that students understand how hard teachers work and, in turn, are willing to put in effort to their classes. This is a unique feature he only saw at one of his previous schools.

“If I could, I would teach at this school for the rest of my life and for my afterlife,” he said.