In his light-filled office, large trophies and photos of smiling teams are a testament to a long career working at Heschel and beyond. Having served as athletic director for the high school since before its inception – now almost sixteen years – Larry Rispoli will retire at the end of this year. Larry has a long, storied carrier, having also spent time working as a kindergarten art teacher, learning how to cook Italian cuisine in Italy (and later working in his family’s restaurant doing so), modeling, and playing baseball at a near-professional level.

Larry was born and raised in Hell’s Kitchen, the neighborhood on Heschel’s doorstep, which has undergone a fair amount of gentrification since his childhood. In high school, Larry discovered his passions for sports and the arts. As he began his college search process, Larry attracted recruiters from universities around the country. He ultimately chose to attend Oklahoma State University, which offered him a full scholarship for his impeccable skills, and he majored in art education and advertising. After college, Larry was unfortunately injured, allowing him to continue playing for only a short time. During that time, Larry’s art career flourished: his senior show was critiqued by artist James Polk Smith, he had his artwork displayed in a gallery in SoHo, and he had a painting of his featured on the front cover of his university’s magazine.

When his baseball career ended, Larry taught art to kindergarteners and later to high school students. At night, Larry worked at his family’s Italian restaurants. It was during this time that Larry’s family sent him to Italy to learn how to cook. His family’s restaurants went on to become one of the top ten restaurants in New Jersey, and the New York Times gave it a four-star rating. And despite his already busy schedule, Larry made time to model for a top agency called Wilhelmina Models. He was featured in advertising campaigns for a range of companies, including JCPenney.

After a few years of teaching art, Larry pursued a master’s degree in sports management at Montclair State University. Once again dividing his waking hours, Larry worked in his family’s restaurants when not in classes. Upon completing his studies, Larry became athletic director at Berkeley College, where he developed the athletics program that spanned across five campuses. Larry resigned after fifteen years to take care of his parents.

Two years later, Larry stumbled on an advertisement in a newspaper about a new high school looking for an athletic director. The school in question: Heschel. Larry became not only the athletic director, but also a key player in the founding and development of Heschel High School. When sitting at a table with ten people, Peter Gefen, Heschel’s founder, asked Larry what his hopes and dreams for the high school were. Larry said he hoped to create a school that everyone would want to come to because of both the academics as well as the athletic programs. He also wanted Heschel to “be on the map,” to teach sports and life lessons, to win championship games, and to buy property across the street for physical education classes. Fifteen years later, “I got four out of five dreams, and I can’t complain,” he said.

Larry compared his work building the athletic program to his work as an artist, noting that he has built the entire sports program from the ground up. One of the most critical components of the success of the athletic department has been surrounding himself with quality people, such as physical education teacher Jezel Rodriguez, and the various coaches he has chosen to hire to ensure the continued athletic success of Heschel teams.

Over the course of his time here, Larry has strived to be a friend to all students. His mantra to students: “Remember you’re number one, you’re the best, you can do anything you put your mind to no matter what. And never, ever, ever give up.” Student-athletes have indeed felt encouraged by Larry – junior Jordana Tepper noted,“He’s always a friendly face, and he genuinely cares for students’ well being.”

After thirty years in athletic directing, Larry is excited to embark on a new adventure. Flying to the West Coast on June 15, he and his wife have not made definitive plans. “It’s going to be an adventure for both of us, and we will figure it out as we go along,” he said. 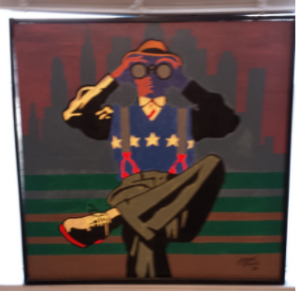 Larry’s art, which was featured on the front-page of his college’s magazine.