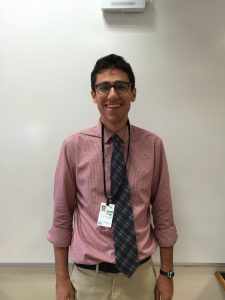 “I initially think I liked history because I would learn something in class and then talk to my parents at home and they had experienced that thing,” Joseph Eskin, the newest member of the social studies department, said. “I think it was one of the only things where I was learning something in school that had an impact on the lives of people I knew outside of school.”

Joseph is from Evanston, Illinois, a suburb of Chicago. He attended a local Solomon Schechter day school through eighth grade, after which point he attended his neighborhood school. His high school, which had approximately 3000 students, was vastly different from his elementary school. “I remember walking into the cafeteria – there were four huge cafeterias in my high school – and there were 500 people whose names I didn’t know, so I was very overwhelmed and very sad when I got home from school that day,” he recalled with a laugh.

Despite the initially difficult adjustment, Joseph is thankful for his high school experience. “There is also something really special about the public school system in America where all the people who live in the place you live just come together to learn together and do things together … I met people and became friends with people who I hadn’t interacted with during my time at Schechter.” Joseph nonetheless maintained his Jewish identity throughout high school, playing French horn in the marching band and playing baseball as an underclassman while attending Camp Ramah in Wisconsin during his summers. “I think I liked being a knowledgeable Jewish person at a school where people weren’t Jewish; it was fun to be someone who could talk about Judaism if it came up,” he said. Moreover, he added, “it helped me find a balance where I want to be involved Jewishly but also not in the bubble.”

After high school, Joseph attended the University of Michigan, where he majored in history and, as part of his undergraduate program, became a certified teacher. He spent three years after college teaching history at the Rochelle Zell Jewish High School, a school close enough to his childhood home that had he opted to attend a Jewish high school, he would have gone there. For his last year, he transitioned into the role of Student Activity Director.

“I was living in Chicago, and most of the people I hung out with and lived with were people I’d known since I was five years old – like people I’d grown up with and went to Schechter with,” Joseph explained. “Things were good, and I had an itch that I would want to do something different, but I was very nervous about leaving a community where I felt really comfortable.” Joseph pinpointed his desire for Jewish learning and was drawn to Mechon Hadar, an institute for Torah study on the Upper West Side, in part because of its commitment to egalitarianism. As part of his fellowship, Joseph student-taught at the Shefa School, a Jewish day school for children with language-based learning disabilities.

Joseph had originally heard about Heschel from coworkers in Chicago, and he was drawn to Heschel for the teachers’ room, which he felt “conveyed a sense that [Heschel] is a really collaborative place for teachers.” He was also drawn to specific members of the faculty; “when I met the other history teachers, I was really excited about working in that department,” he added.

Joseph is teaching two ninth grade classes, one tenth grade class, and a senior elective each semester. During the first semester, he is taking over a long-standing social studies elective, “Dual Narratives,” which provides students with both the Israeli and Palestinian perspectives on Zionism and the Jewish state. During the second semester, Joseph is offering a new course titled “Bold New Faiths: Christianity and Islam in the Middle Ages,” discussing the origins of Christianity and Islam and Jewish life under the rules of each religion.

Joseph took many Medieval history classes in college, and he is particularly excited about discussing the history of Christianity. “Christianity is cool because we have records about how it developed as a religion – we have the notes of board meetings where different priests came together and decided on what the nature of God was, what the nature of sin was, Heaven and Hell, things like that,” he explained. “I think it’s such an interesting space between profound spiritual matters and mundane, everyday human kind of things.”

Having been at Heschel for under a month, Joseph is already enjoying his time here. “The main thing I’ve been impressed with so far is just how mentschy all the students are,” he reflected. “I feel like that’s corny.”

Specifically, Joseph has appreciated the respectfulness of students in t’fillah – Joseph attends the egalitarian minyan – something he hasn’t observed in many other environments. Moreover, he is impressed by the communication between students and faculty, which he described as seeming “open, honest, positive, and excited.”

Additionally, Joseph is the faculty advisor of Model UN, and he is excited about all that Heschel has to offer. “The student activities I’ve seen or heard about seem to be really amazing. People are trying to do good things in and outside the school, and I feel like maybe people here take that as a given, but it’s not always a given; it doesn’t always happen that people are directed outwardly like that,” he explained.