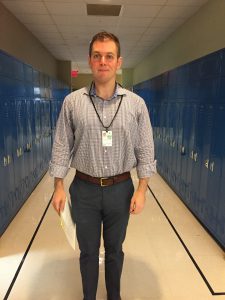 Aaron Boalick, Heschel’s newest Spanish teacher, has had a passion for teaching from a young age. Even as a child, he played school with his family members, forcing them to pretend they were the students and he was the teacher.

Aaron grew up outside Pittsburgh, Pennsylvania, in an area he described as “the middle of nowhere.” This rural setting, in part, was what drew him to Spanish. Foreign language gave him the ability to explore other cultures and therefore escape his small town, leading him to become attached to Spanish in high school.

After high school, he went to the University of Pittsburgh. Following his undergraduate education, he attended the University of Michigan to ultimately receive his Ph.D. in Spanish. Aaron then moved to New York City, where he has lived for the past three years. At Columbia University, he pursued another passion of his: film. In addition to getting a master’s degree in the field, he also writes freelance film criticism.

Aaron came to the city not only to continue his study of film, but also to live a brand new life; the city presents a drastic different setting from the town in which he grew up. In his spare time, Aaron enjoys exploring the city. It was his appreciation of it that led him to stay even after finishing his program at Columbia.

Aaron was drawn to Heschel because he was “excited about the academic and cultural programming.” He also was looking forward to working with the Heschel faculty because they “seemed great in their approach to teaching,” citing student-centered learning as a particular focus of his. So far, though, other than the full school programs, his favorite part of working here is definitely his students.