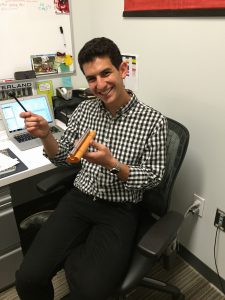 While Carl Haber’s title is “Machar Fellow,” multi-talented floater would be a better description of his position at Heschel. It is impossible to find Carl in one place throughout the school day; he is either leading the Social Justice Minyan, facilitating the American Voices club, teaching 10th grade advanced conversational Spanish, co-directing the Harmonizers, shadowing an English class, or working in the JSL office, with or without members of the Hesed council.

Carl grew up in Miami, Florida. It was not until he was in high school, that Carl moved to the Boston area to attend Gan Academy, which, like Heschel, is a small Jewish, pluralistic day school. Following high school, he studied psychology, education, and music at Tufts University. The classes Carl found most “inspiring” at Tufts were his education classes. Consequently, he moved on to do community service with AmeriCorps. While participating in a program called City Year, Carl worked with underprivileged 9th graders as an assistant teacher in a Boston public school to increase graduation rates. He also tutored students and provided them with social and emotional support.

Carl’s experience at the public school in Boston brought him to become part of the founding cohort of the Machar Fellowship, which then brought him to Heschel. The mission of the fellowship is to develop young Jewish educational leaders. Two Jewish leaders are selected to work in each of the three participating Jewish day schools: Heschel in New York City, Gan Academy in Boston, and DeToledo in Los Angeles. “The fellowship is an amazing opportunity to create things as a potential educator,” Carl says. “Last year [at the Boston public school] I focused a lot on educational inequality, and here I feel like I am honing my teaching craft a little bit more. I am getting two totally different [opportunities to help] me develop as an educator.”

When Carl is not at Heschel, he enjoys spending time outdoors, specifically hiking. His love for the outdoors, as well as his talent for the Spanish language, led him to lead Spanish immersion and hiking trips for middle school and high school students over the past two summers. Two summers ago he led one trip for 6 weeks in the Pyrenees, and this summer he lead one trip for 7 weeks in Costa Rica. The trip to Costa Rica also included public service, another one of Carl’s passions.

Carl looks forward to the two upcoming Machar Fellowship summits in which he will hear from the Boston and LA cohorts regarding their experiences. One summit will be in New York City and the other will be in LA. He also looks forward to the Harmonizers concert. “Acapella is an area where I feel very comfortable; it comes natural to me,”  Carl says.

“It feels good to be here,” Carl says.  “It feels like the [Heschel] community has embraced us [Machar Fellows].”